HomeBlogI Ride Test Bikes So You Don’t Have To

I Ride Test Bikes So You Don’t Have To

by Bicycle News⚫July 2, 2019⚫0 comments
As I’ve said many times before, living in New York City’s only mainland borough has two significant advantages:

1) When the glaciers melt the rest of you suckers will all be underwater and my home will be worth millions;

B) I can easily do a dirt ride in the same amount of time the rest of you suckers spend doing laps in Central and Prospect Parks.

Insofar as B) is concerned, I did just that earlier this morning, and was able to take in healthy slices of both Sprain Ridge Park and the Old Croton Aqueduct trail before many of my neighbors had even withdrawn their MetroCards.  And of course I did so on the new Jones LWB: 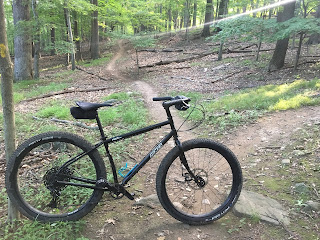 Unlike my last foray on this bike, this route is one I’ve ridden on the SWB many, many times, and so I was able to make a more direct comparison between the two bicycles.  While I still plan to undertake some back-to-back rides, my first impression was that the SWB is a slightly “rowdier” bicycle in that it sort of encourages you to lift the wheels up and throw it around, despite its heft.  The LWB on the other hand feels smoother and more genteel, and while I was less inclined to throw it around I also didn’t really need to since it rolls over rocks and logs so easily.

But while I would not characterize any of the aforementioned differences as earth-shattering, there is one other area in which they do seem to differ fairly significantly, and that is ground clearance.  As I’ve mentioned, my only complaint about the SWB in a mountain bike capacity is that it is prone to pedal strike–I mean I can totally deal with it, but it is a factor here in the land of roots and rocks.  Alas, I only had time to ride a portion of Sprain Ridge Park this morning, but it does seem that the LWB is better in this regard.  Furthermore, when I got back home I performed a highly scientific test by placing the bikes next to each other with the cranks in the vertical position: 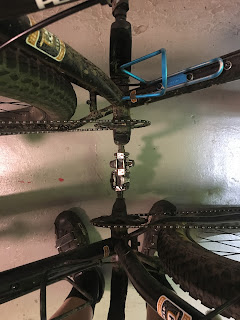 Were the cranks perfectly vertical?  Were the bikes even standing perfectly upright?  I have no idea.  However, based on this cursory comparison it looks like the LWB was almost a pedal’s thickness more clearance than the SWB.

The chainring also appears to be quite a bit higher, which would stand to reason because even disregarding the geometry differences the SWB has a 32-tooth chainring and the LWB has a 30-tooth: 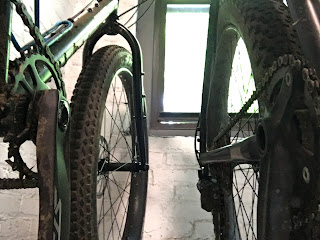 Again, standing the bikes next to each other for two seconds is not really the basis for drawing conclusions, and more trail time will reveal just how much of a factor any increased ground clearance is, but so far I do prefer the LWB in that department.

As for smooth dirt and pavement riding where clearance is not a factor, the LWB also feels a bit more road bike-like, most likely due to its proportions.  Regardless, what both bikes have in common is that they totally negate any desire I may have felt in the past for a “gravel” bike.  The fact is that between a regular road bike for full-on road riding and a Jones for everything else you’re totally covered without sacrificing anything.  Oh sure, I suppose if you’re an ultra-competitive Gravel Fred you might want a crabon pebble chariot with drop bars and a flat-back positioning and all that stuff, but barring that a bike like this is ideal for everything from a mellow mixed-terrain ramble to full-on trail riding.  (Plus you can carry all your worldly possessions on it, which quite frankly I’ll probably never, ever do.)

Anyway, having typed all that, I reserve the right to flip-flop pending the completion of back-to-back identical rides on both bicycles.  So far the only thing I’m completely sure of is you can’t go wrong with either.