by Bicycle News⚫June 28, 2017⚫0 comments
In this latest installment of our “Subversive Cycling Photos” series, we travel to Egypt. The same utterings are heard here as most other places. About how “it’s too hot to cycle” and “oh, but we never had urban cycling here…” With these historical photos, we once again bust some myths, like we’ve done for Singapore, Los Angeles, Rio de Janeiro, New South Wales, Vancouver, Oslo, Dublin, Canberra, etc.

Copenhagenize Design Company has had the pleasure of hosting architect and urban planner, Ahmed Tarek Al-Ahwal, on an exchange from Egypt made possible by the support of the Danish Egyptian Dialogue Institute. He curated these photographs highlighting a long and proud history of using the bicycle as transport in his country. 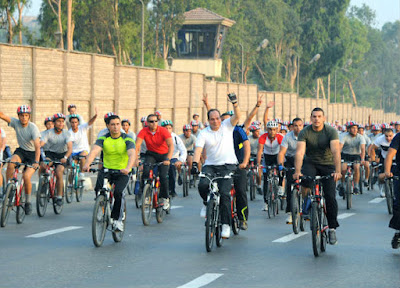 Egypt’s President Sisi has been on a bike ride or two, like this one in 2014. He has said that Egyptians should cycle more and that the country can save 16 Egyptian pounds for each 20 km cycled. He has, however, failed to provide any infrastructure.

In the recent memory of some Egyptians, cycling used to serve a much wider group of users than today. Residents in Port Said, a port city on the Suez Canal, are proud that cycling used to be their main mode of transportation. Indeed, during rush hour, the ferries were loaded with the bicycles of employees going to work. It´s a narrative that is heard in many other cities, usually followed by remarks about how women and children used to feel much safer cycling in cities and how there used to be many more bike shops – especially those serving a double-purpose. Shops that were also garages that would clean, repair and store bikes overnight.

Stories of huge bicycle racks next to office buildings, factories and schools are heard across the nation, from the north to the south. The textile factory in Shebin, a city in the northern Nile Delta used to host one of those, which was removed after cycling disappeared under the weight of car-centric planning. 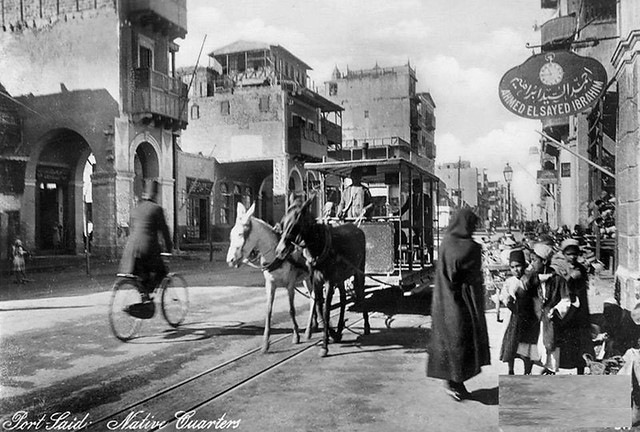 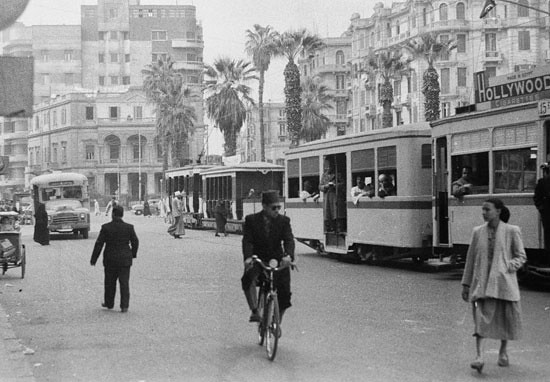 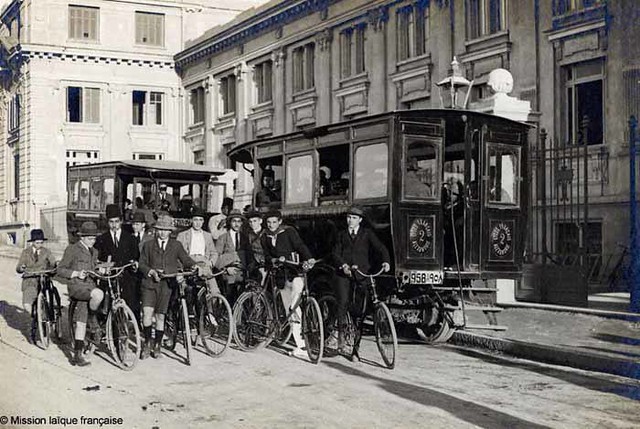 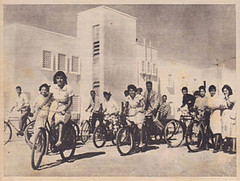 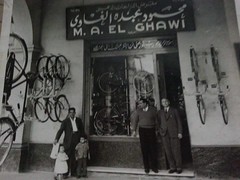 Left: A magazine article about the opening of a factory in Qena, south of Egypt. Factories were associated with bicycles in the 1960s.
Right: Bike shops used to be a very common sight, catering to many clients. Port Said. 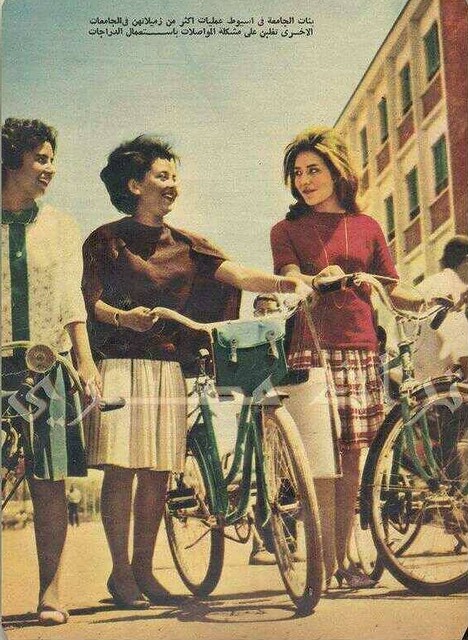 Caption reads: “University girls in Asyut are more practical than their colleagues, overcoming traffic problems by using bicycles” a quote from a magazine. Asyut 1960s. 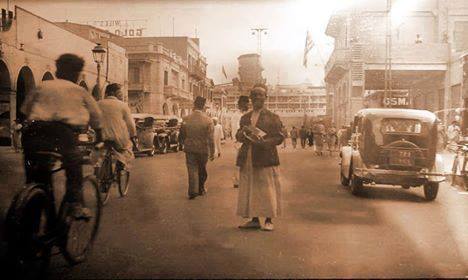 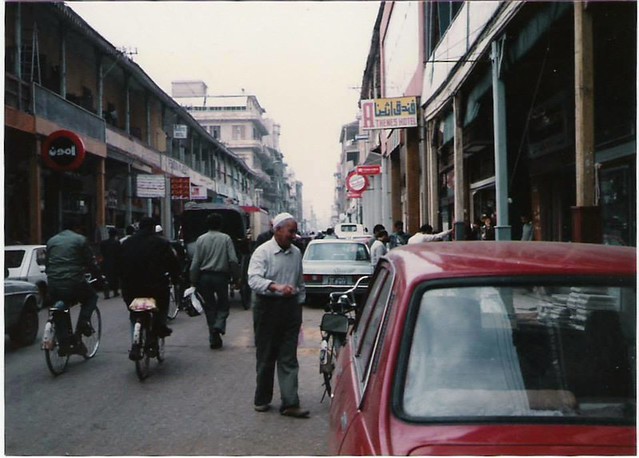 Bicycles were a normal sight on the streets, at least through the 1980s. 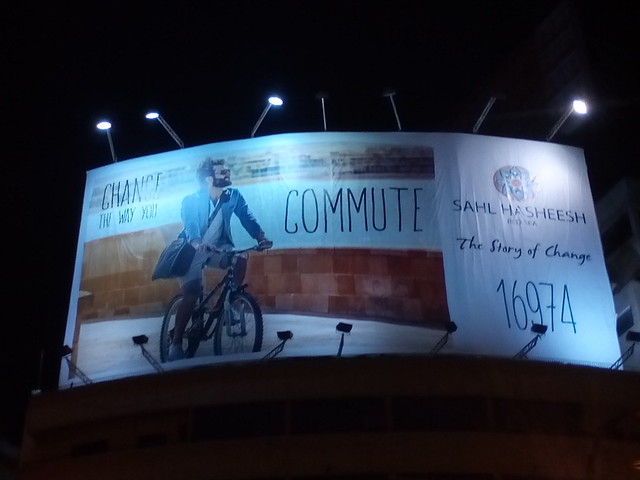 “Change the way you commute” An advertisement in Tahrir square for vacation houses on the red sea coast. Summer 2016.

For many Egyptians, like other places around the world, cycling has become something unusual. Something subcultural, something done by poor messengers to transport goods, something for kids to do or a tool for advertising luxury, gated communities (photo, above). 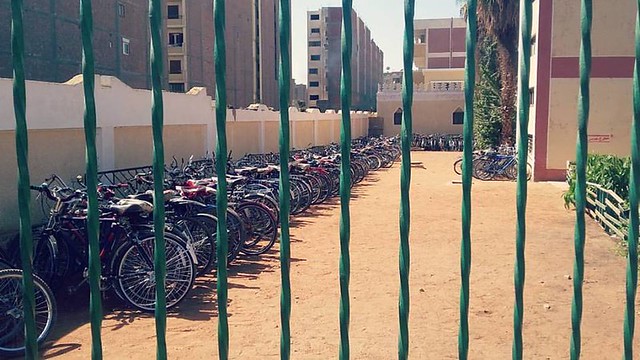 In many areas in the south of Egypt and the Nile delta, one can, however, still witness a wide variety of bicycle users. In Assiout, in the more conservative south, one can still see huge bike racks in schools (above) and public buildings. 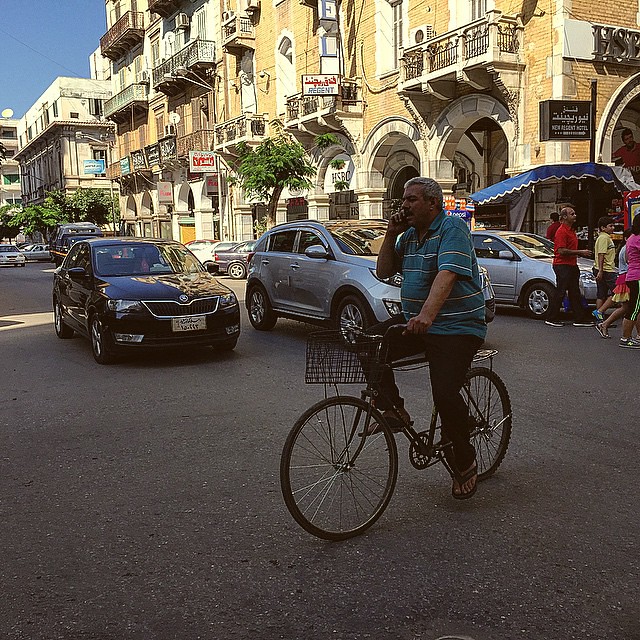 While in other cities, men in their 50s or 60s riding vintage bicycles serves as a reminder that cycling is not alien to Egyptian minds and culture. 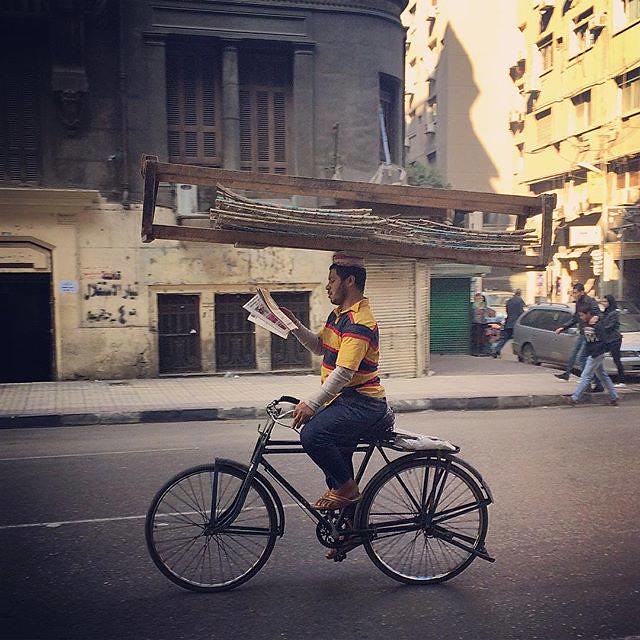 When former bicycle users from this generation are asked about the reasons for the decrease in cycling modal share, they talk about the change of time, about the era where cars were much less and streets safer and you could feel safe about your kids rushing on their own through the streets. They also talk about the availability of bike racks near homes and work, and services around the city. All practical reasons that could easily be addressed by cities that aim to have less congested, less polluted streets with a better quality of life that is not exclusive to luxurious gated communities. Not to mention a healthy density and an economic alternative to sprawl. 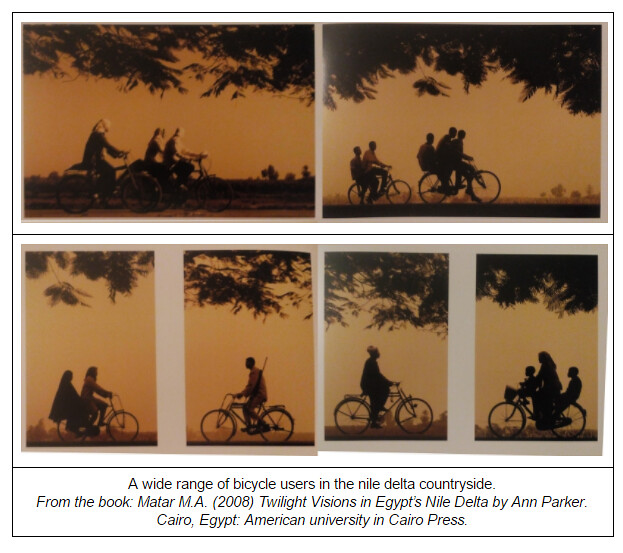 Unlike the old era, attempts to build bike infrastructure in the few last years in Egypt haven’t achieved the required goals. Instead of being used as an example of how cycling doesn’t fit the Egyptian culture, these projects must be addressed critically. 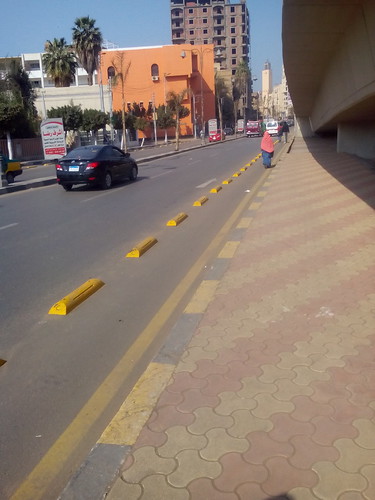 A symbolic stretch of bike lane.

The bicycle lanes painted on the Shahid corridor, an 8-lane highway in the desert, 14 km from the center of Cairo and 3 km from the nearest residential low density suburban area doesn’t seem to be a logical location to start.

The UNDP project of cycling lanes in Shebin are often ignored by bicycle users; the lanes deal poorly with intersections, also they don’t provide enough safety for bike users from traffic and are very vulnerable to be overtaken by car parking.

Safety and the perception of safety is a main issue keeping down the numbers of bike users and, if not addressed properly with infrastructure, cycling will not rise again as transport in Egyptian cities.