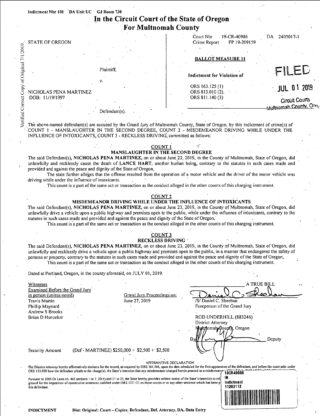 The Multnomah County District Attorney’s Office has filed an indictment against Nicholas Martinez, the driver who struck and killed Lance Hart while he rode his bicycle on SE Flavel Street in the early morning hours of June 23rd.

Martinez, who faced a judge at a hearing this morning, is being charged on three counts: Manslaughter in the Second Degree, Misdemeanor Driving Under the Influence of Intoxicants, and Reckless Driving.

In the probable cause affidavit filed last week, Deputy DA Kelley Rhoades said a witness saw Martinez get into his car at the 7-11 on SE 82nd and Flavel and then leave the parking lot “in an aggressive manner ‘at a high rate of speed’” just prior to the crash. Here’s an excerpt from the affidavit:

“Martinez told Officer Hunzeker that he was drinking Sprite and Tequila most of the day with his friend and had never drank Tequila before… He reported his speed had gotten up to 30-40 mph and he was looking down to take a bite of his taquito. When he looked up a person with a bicycle was in the middle of the road. Martinez said he applied his brakes, but could not stop and crashed into the bicyclist.”

Hart was riding on a street with no physical separation from auto users or protected space for vulnerable users. He was the 26th person to die on Portland roads so far this year and the second person who was riding a bicycle. We’ve had 27 people die in traffic crashes in 2019.