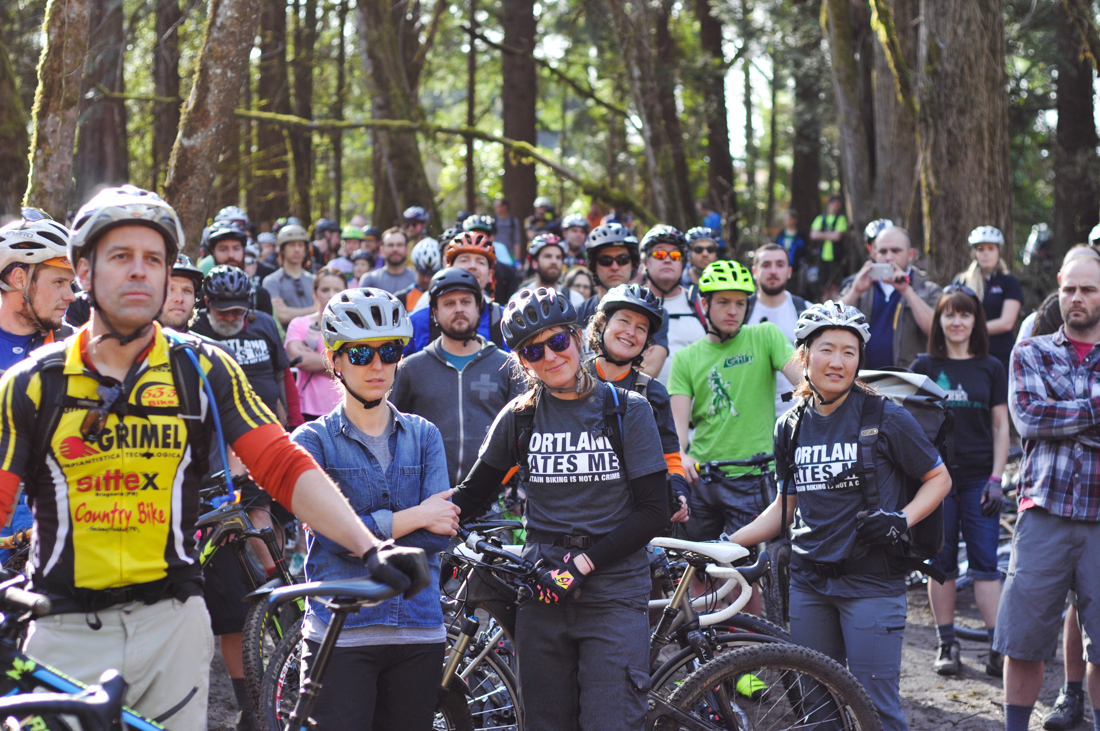 People turned out in large numbers for a 2015 rally to protest the lack of cycling access in River View Natural Area.
(Photos: J. Maus/BikePortland)

It’s been over four years since the City of Portland embarked on an effort to create a master plan for off-road cycling. The draft of the Off-road Cycling Master Plan came out in November 2017.

“We need the plan to be passed so we have a roadmap for how we can help.”
— Andy Jansky, NW Trail Alliance

Despite all this time, the plan remains unfinished and continues to languish on someone’s desk at the Bureau of Planning and Sustainability.

Friday morning, advocates with Northwest Trail Alliance will renew their campaign to get it finished. They’ve spent months planning a ride with local and regional electeds and policymakers that they hope will lead to more urgency around the plan.

“We need the plan to be passed so we have a roadmap for how we can help,” veteran NWTA volunteer Andy Jansky shared with me today. Jansky has been working behind-the-scenes to get agency and city hall staffers to show up for Friday’s ride. He says NWTA has a large and willing community of members who would love to help the City of Portland work toward better off-road cycling access in parks and other greenspaces throughout the city.

People who want more opportunities to ride bikes on singletrack and other types of natural surface trails within city limits have been working on this issue for well over a decade now — and they have very little trail mileage to show for it. The last time a piece of cycling-specific singletrack was built in Forest Park (to cite just one example) was 2006 when advocates helped build less than a mile of trail off of Firelane 5.

Since then, progress has been painfully slow. 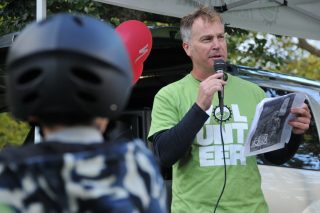 Jansky has been a stalwart advocate for years and remains optimistic that his efforts will soon bear fruit.

Tomorrow will mark the 12th anniversary of the last time mountain bike advocates took electeds and city staffers on a ride to highlight their issues and concerns. Friday’s ride will have the same goal; but hopefully it won’t take another 12 years before we open up new off-road cycling access.

City of Portland Bureau of Planning & Sustainability Project Manager Tom Armstrong is heading up the Off-road Cycling Master Plan. He’ll be on Friday’s ride. Asked for an update on the plan today, Armstrong said he’s been busy working on other priorities (like manufactured dwelling parks rezoning and fossil fuel terminal zoning), “But will be getting back to finalizing the plan later this year.”

Armstrong says BPS has three large sets of comments to reconcile before moving forward: those from the project’s advisory committee, the Portland Parks Board and the public. Once those comments have been analyzed, he says they’ll make final adjustments to the existing recommendations in order to inform future projects.

“Provide experiences across the city so that all residents can access close-to-home riding opportunities.”
— from the Off-road Cycling Master Plan discussion draft

The draft as it exists today recommends a system of off-road paths and trails with a goal to, “Provide experiences across the city so that all residents can access close-to-home riding opportunities.” The vision is to develop a few large “anchor sites” citywide (like Gateway Green, Forest Park, and so on), mid-sized opportunities at the district level, and smaller facilities in neighborhoods. Once identified, the plan says the projects should create, “A connected system of well-distributed trails and bike parks, accessible by bike and transit, to offer urban experiences and access to nature for all.”

During Friday’s ride, NWTA’s Jansky hopes to share a few of his ideas with decision-makers. Among them are: better integration on trails between Parks and the Bureau of Transportation, an off-road cycling corridor in southwest (the draft plan has nothing for that quadrant), and using undeveloped right-of-way to create connector trails between neighborhoods.

Of course it all comes down to politics. And NWTA’s Jansky says the off-road cycling issue, “Doesn’t appear to be a priority with some people in city hall.” He hopes Friday’s ride — which should have about 45 attendees — will change that. “We’re trying to turn up the heat on this issue a few degrees,” he said.