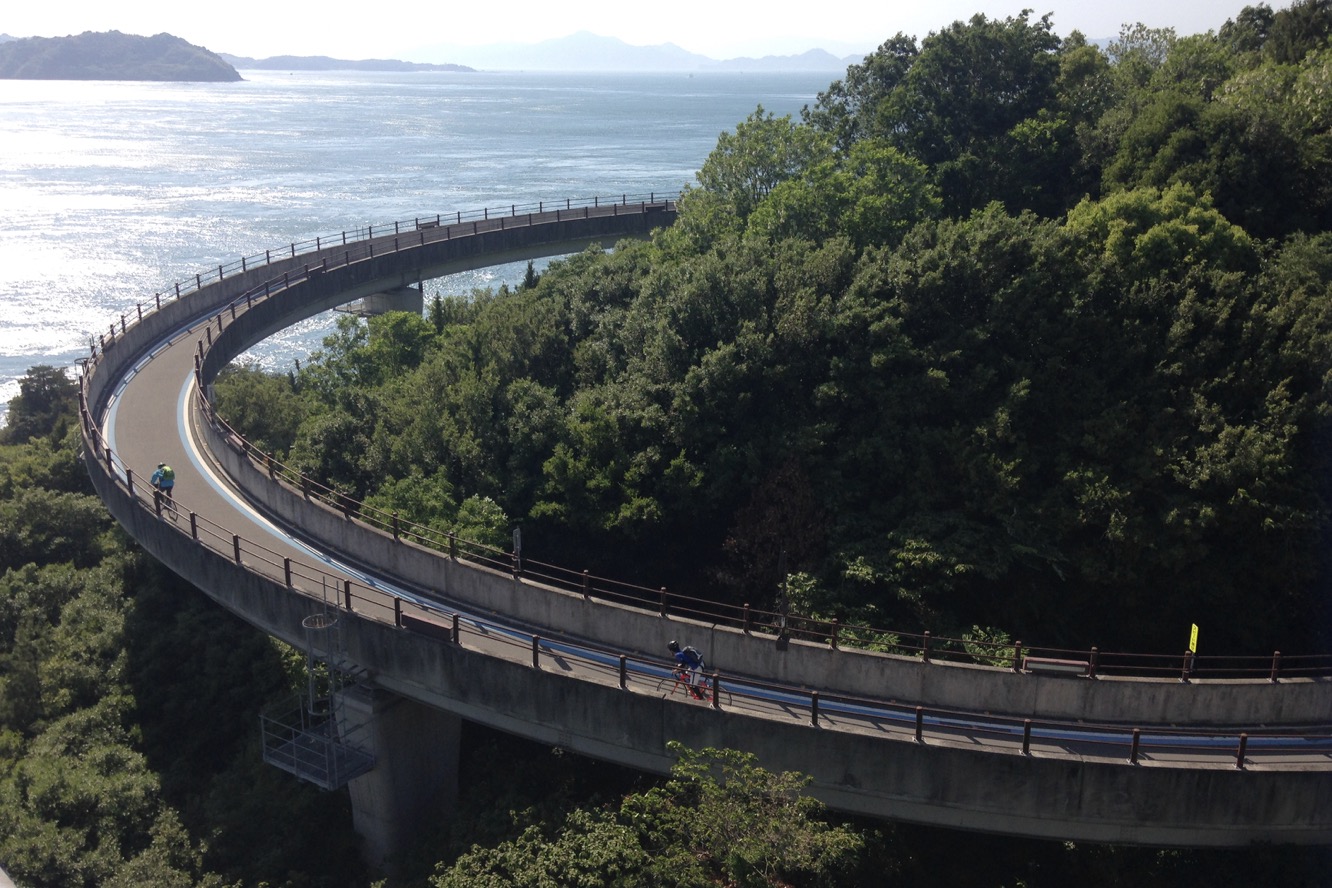 Robert Pickett, a former (and future!) Portland resident and member of the Portland Police Bureau Bicycle Patrol Unit, is currently serving as a U.S. diplomat stationed with his wife and two daughters in Sapporo, Japan.

“Its the best ride in Japan—let me know if you end up doing it and want some company.” High praise from my boss — a taciturn triathlete with an eye for art and nature, and many years living in Japan. I figured I’d better ride the Shimanami Kaido sometime before the end of my time here. 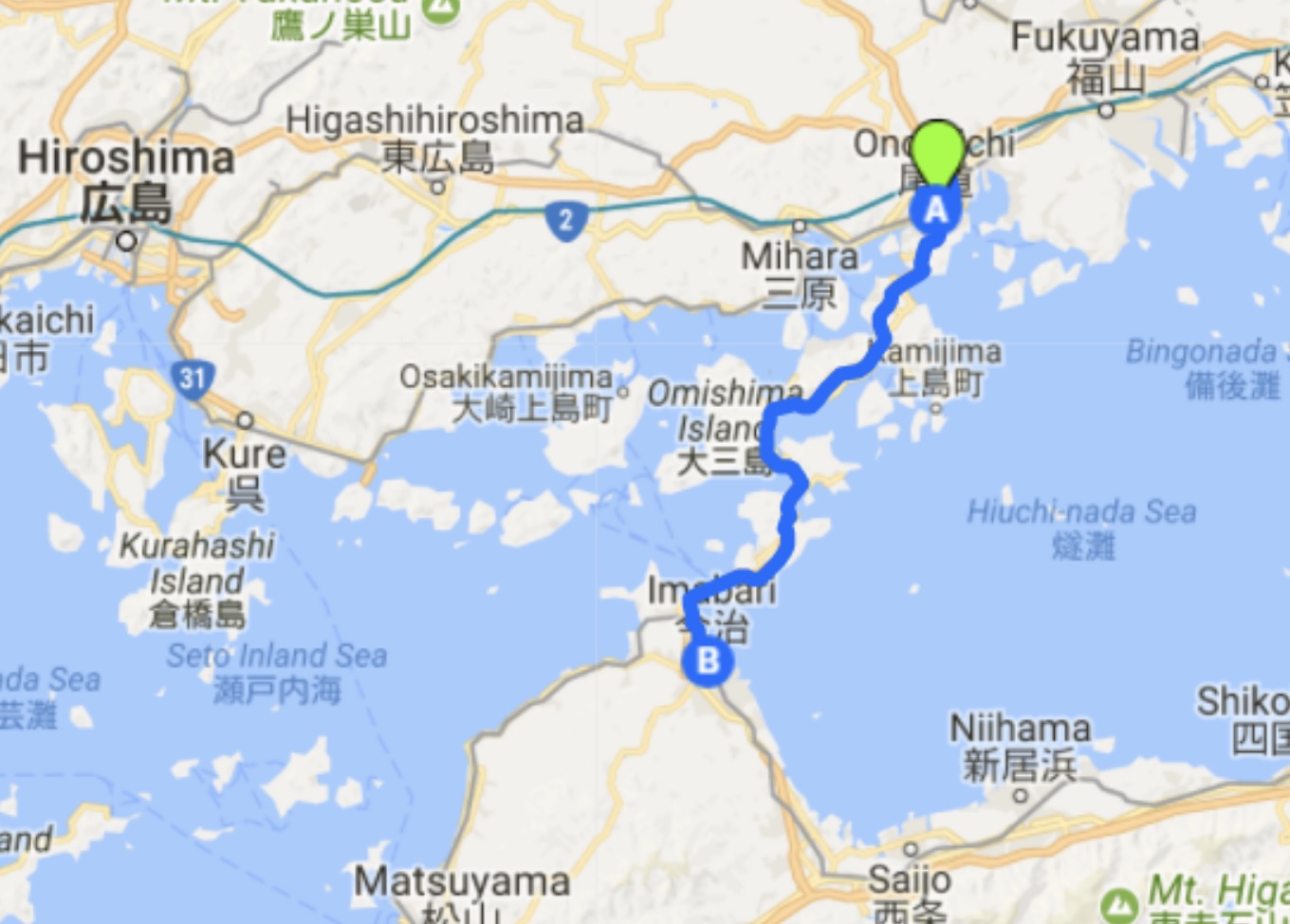 The route hops over several islands.

The Shimanami Kaido is a 45-mile bicycle route across Japan’s Seto Naikai (Inland Sea) from the City of Onomichi on Japan’s main island of Honshu to the City of Imabari on Shikoku, the smallest of Japan’s four main islands. Well marked, its mostly country roads skip across six smaller islands via one ferry and six soaring bridges, all with dedicated bicycle facilities.

Last May, during Japan’s Golden Week of consecutive holidays, my boss and I spent three days and three nights surrounded by amazing culture and unforgettable scenery in an out-and-back trip starting in Yokohama. 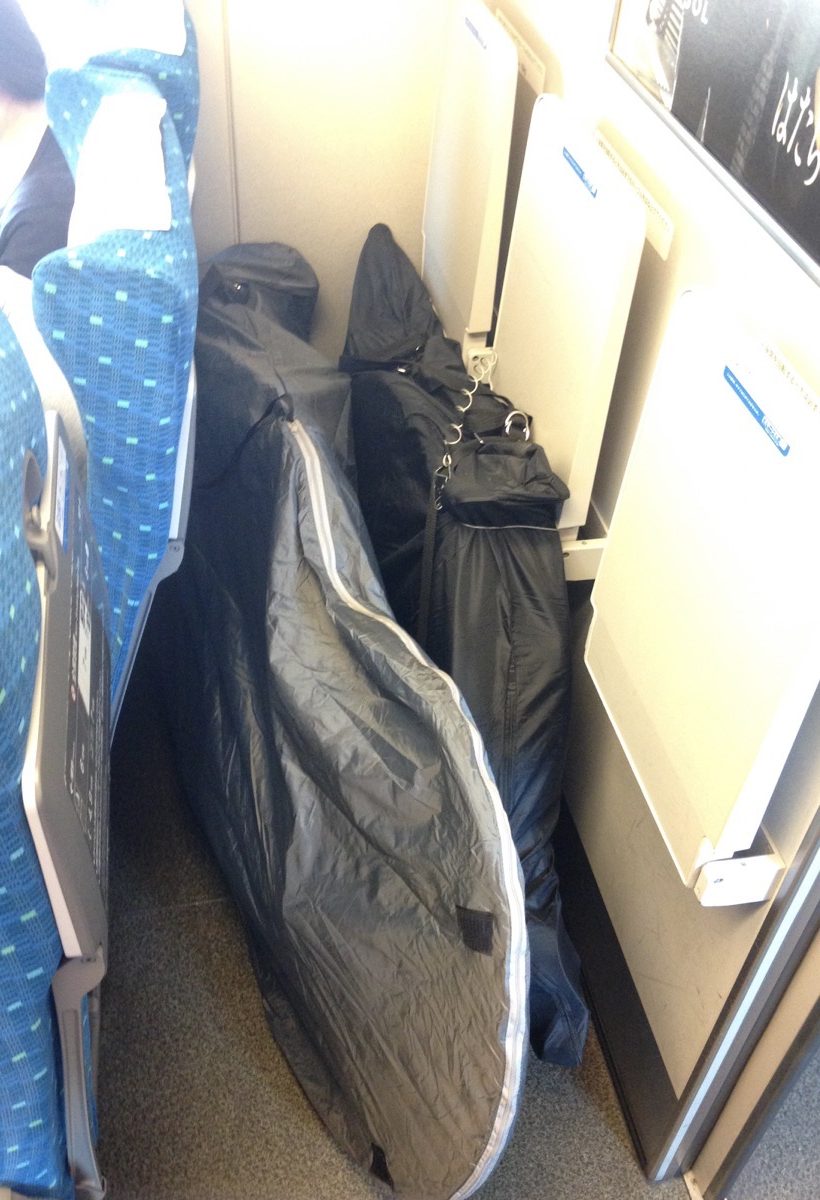 Our bikes, tucked away on the train. 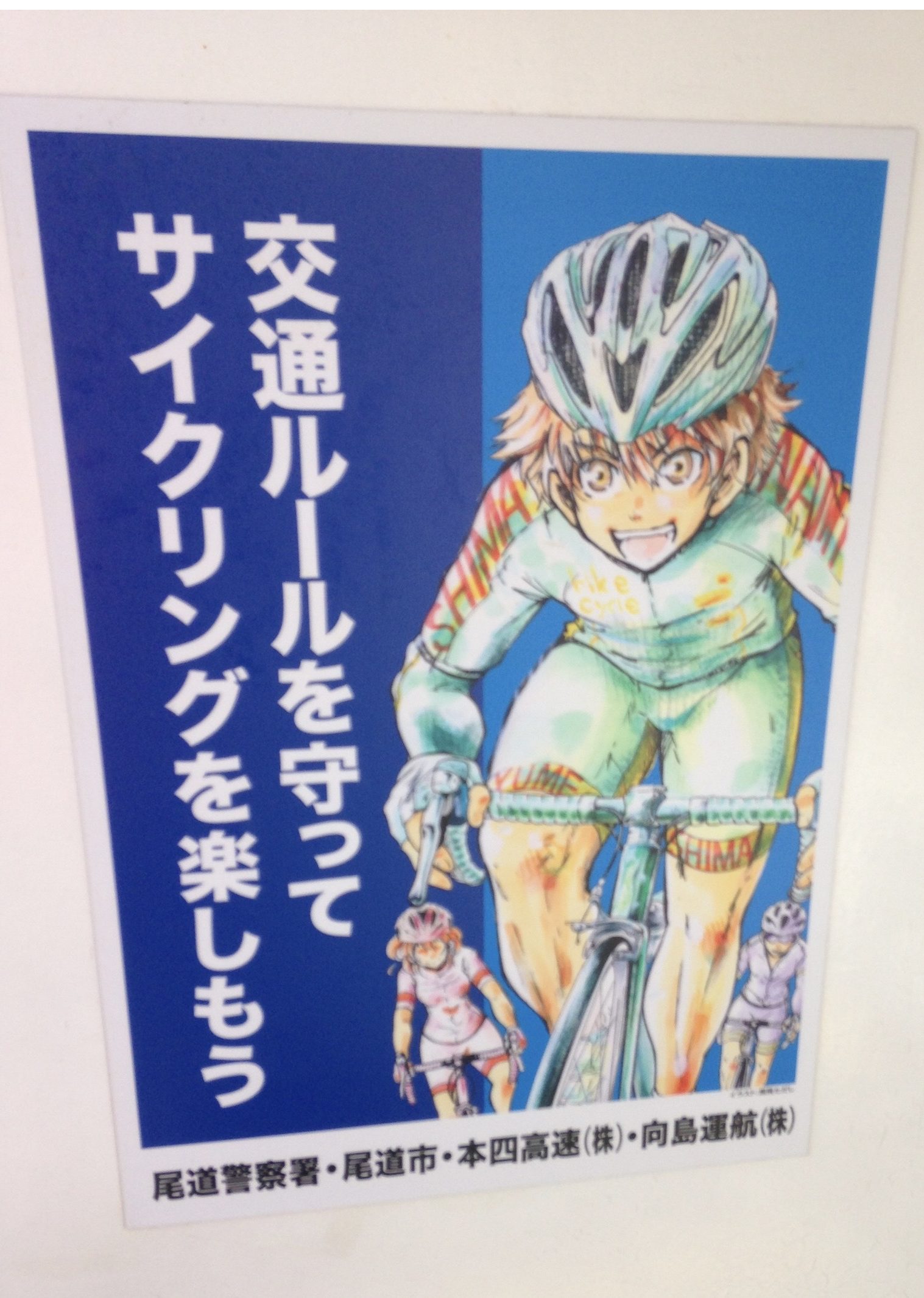 It says, “Let’s follow the traffic rules and enjoy cycling!”

In Japan, if your bike is covered by something, anything, you can bring it on most trains for free. This lovely policy his has led to the birth of a relatively small, but active rinko (bike travel) culture. Most bicycle shops sell thin plastic rinko bags shaped to encase a bicycle with one or both wheels removed. It isn’t exactly putting your bike in a plastic trash bag, but close. My boss and I bagged our bikes and hopped on the bullet train, stashing them in the space behind the last row of seats. Arriving in Onomichi about two hours and 400 miles later, we reassembled our bikes and rode to a hostel for the first night.

The next morning started with a ferry across a narrow waterway to the first island stepping-stone. Originally designed for a couple of cars, the boat now hauls cyclists and pedestrians for a minimal charge. At the opposite terminal we started following the special blue-colored fog lines that guide cyclists along the Shimanami cycle route to the first of six major bridge leaps to the next island. The bicycle approaches to most of these bridges are completely separated from the motor vehicle approaches, and the first one was a ten foot ribbon of asphalt winding through trees and flowers on a climb up to the cycle/ped crossing suspended below the main automobile deck. 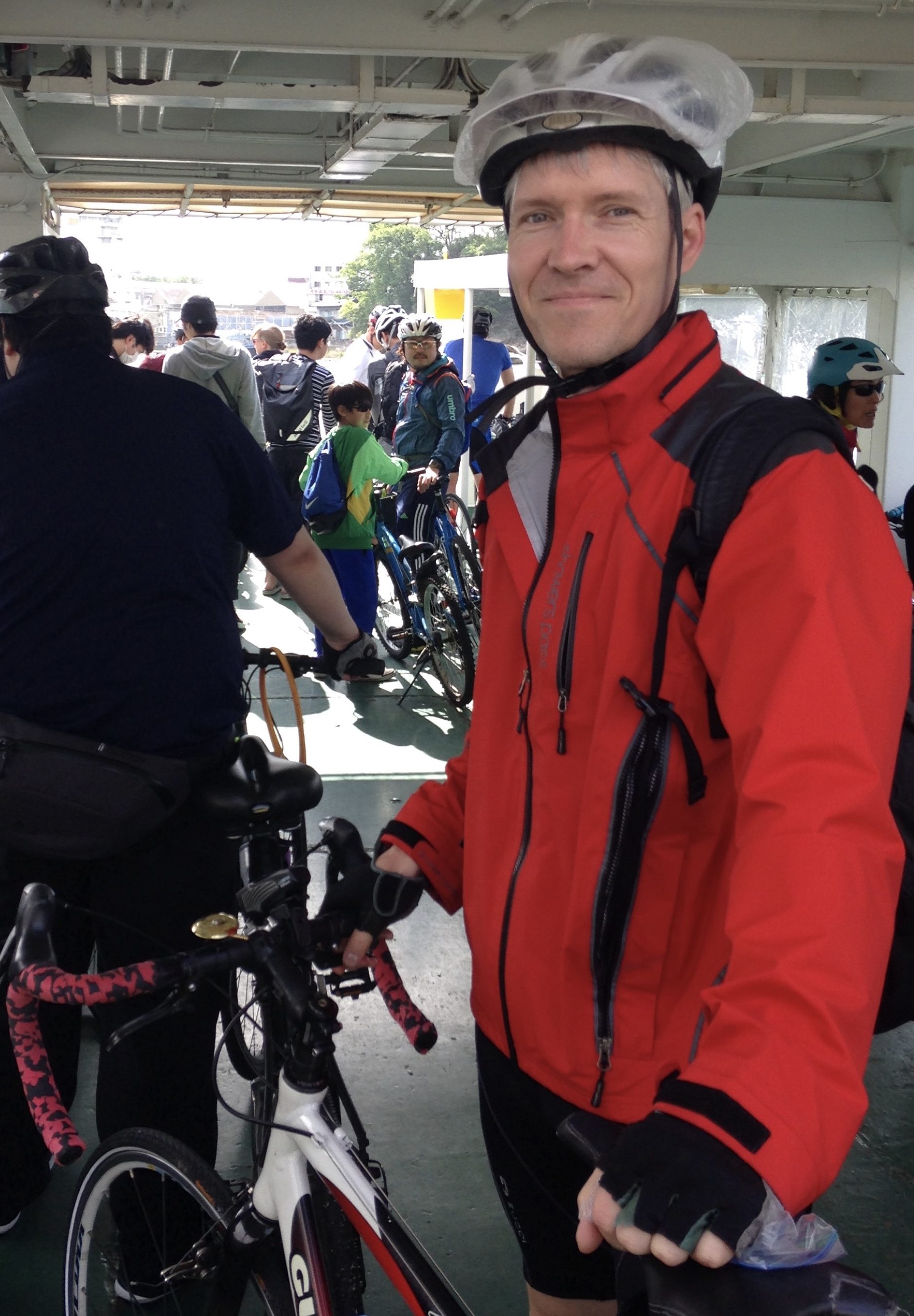 Satisfied grin of a biker on a bike/ped only ferry. 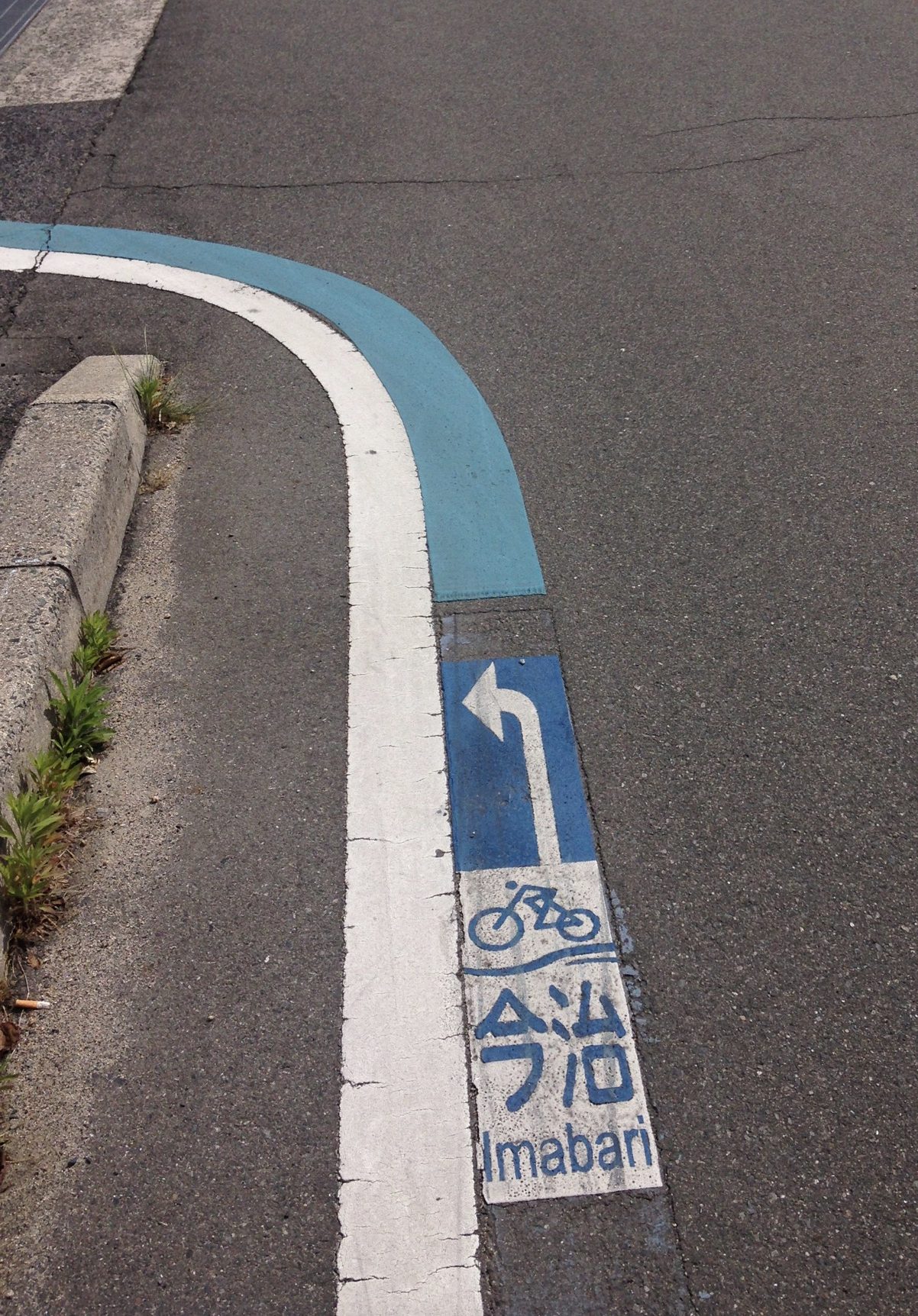 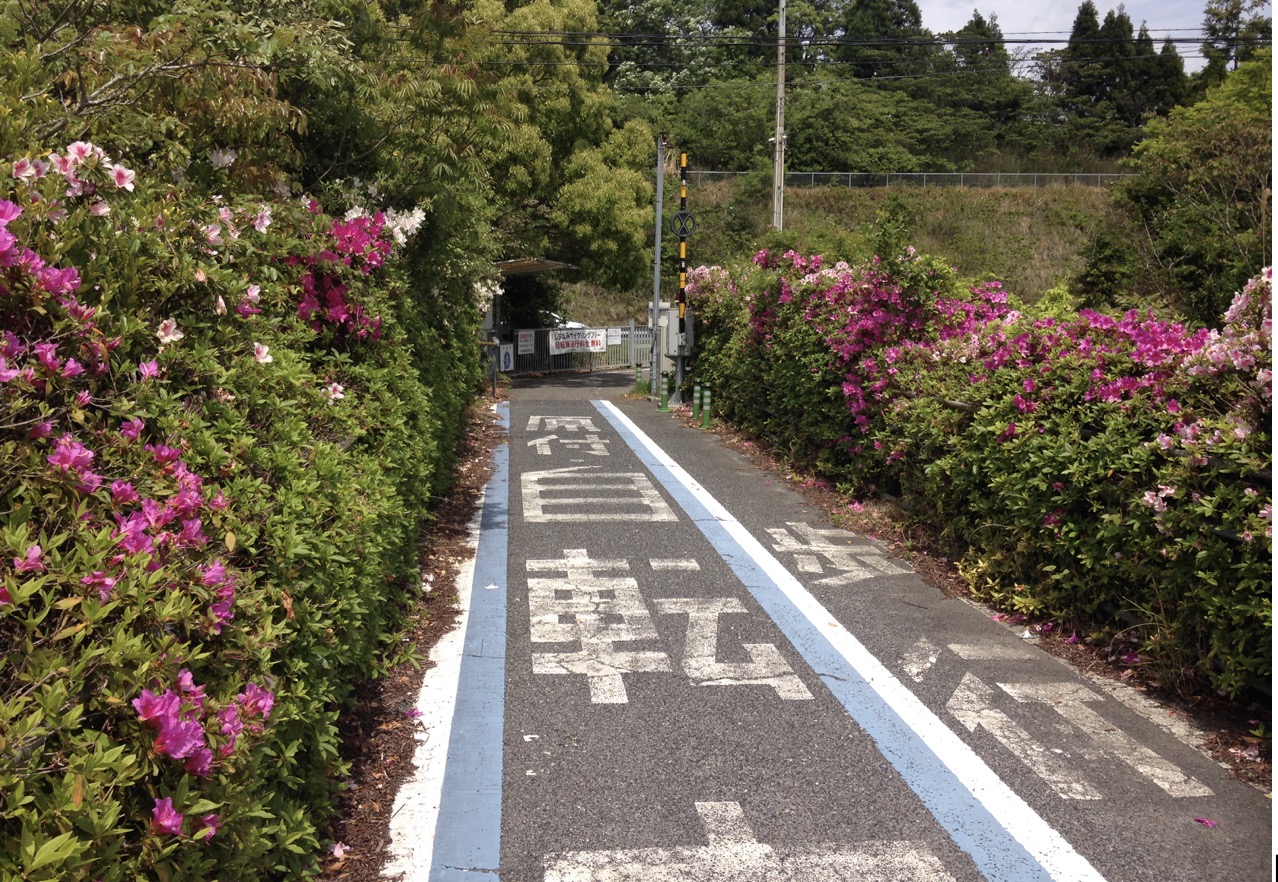 One of many lovely bridge approaches.

Cars above, bike riders and walkers below.

The day continued with bridge crossings and blue road traverses along emerald-edged coastline, through citrus and fig fields, and narrow village streets. 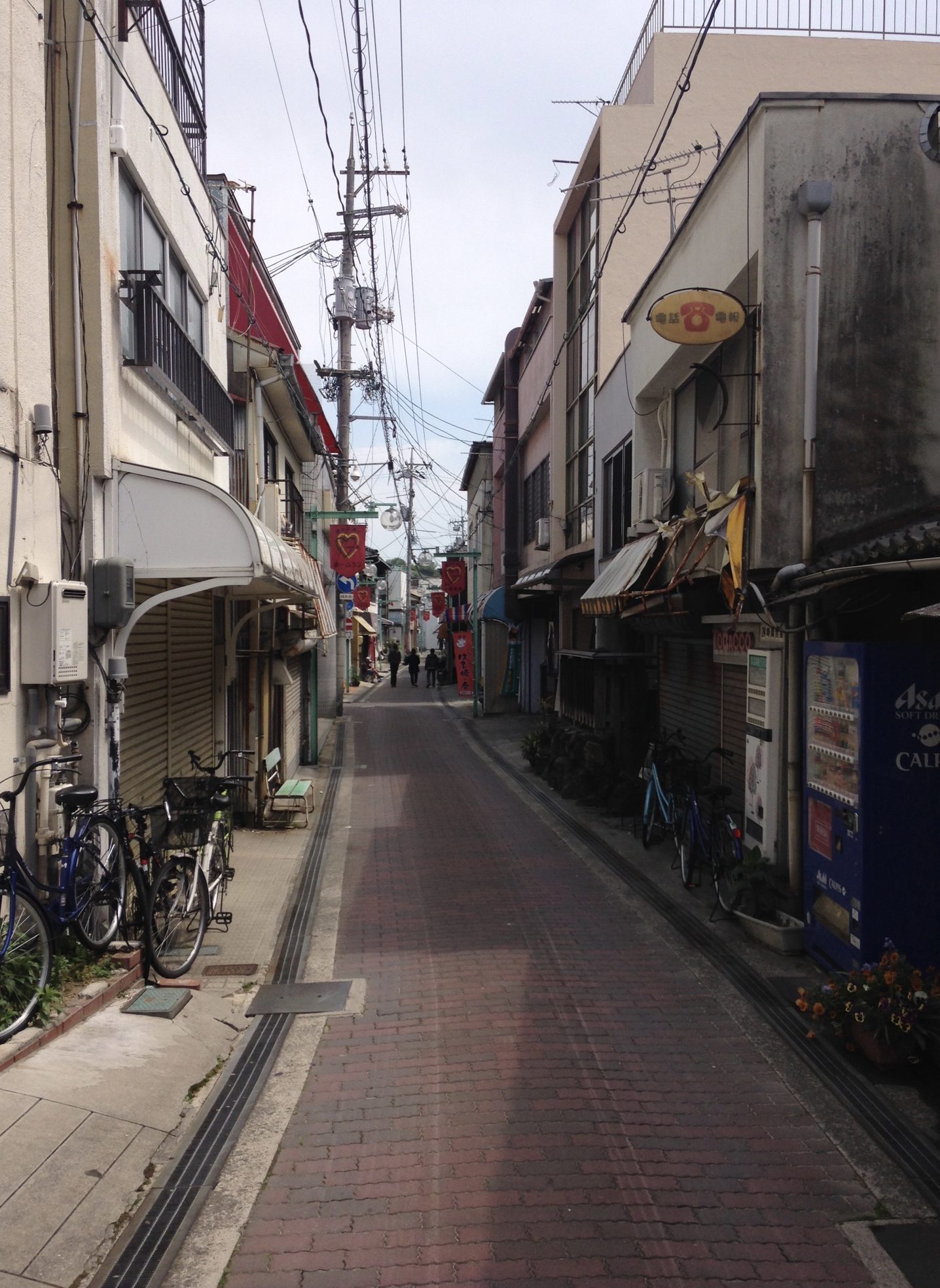 Traffic was relatively light, and featured plenty of other cyclists. Some were clearly serious with lots of spandex. Others were families with younger kids, out to ride just a bridge or two. Another nice thing about Japan is the frequency of convenience stores and their relatively fresh, healthy fuel options. 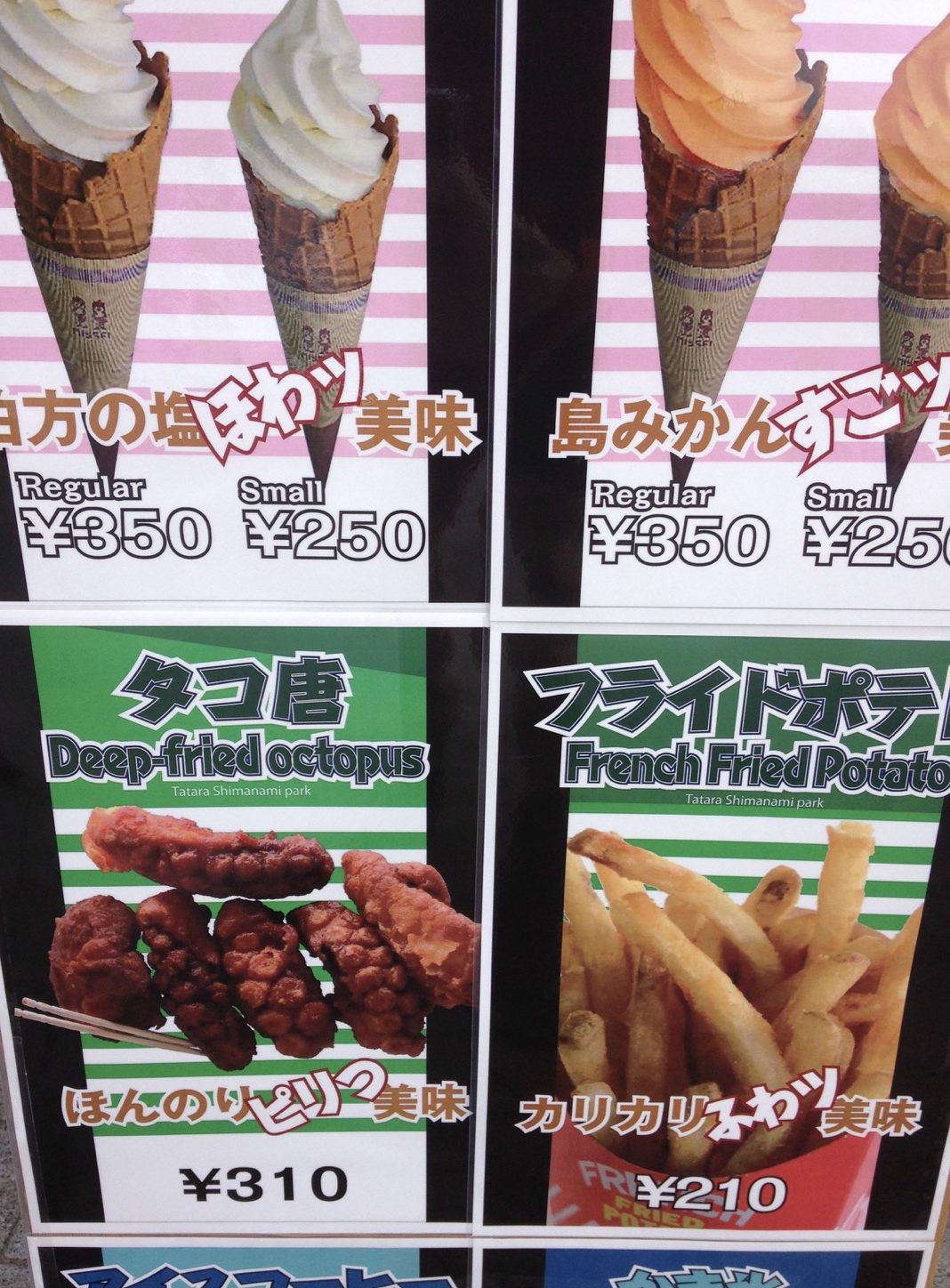 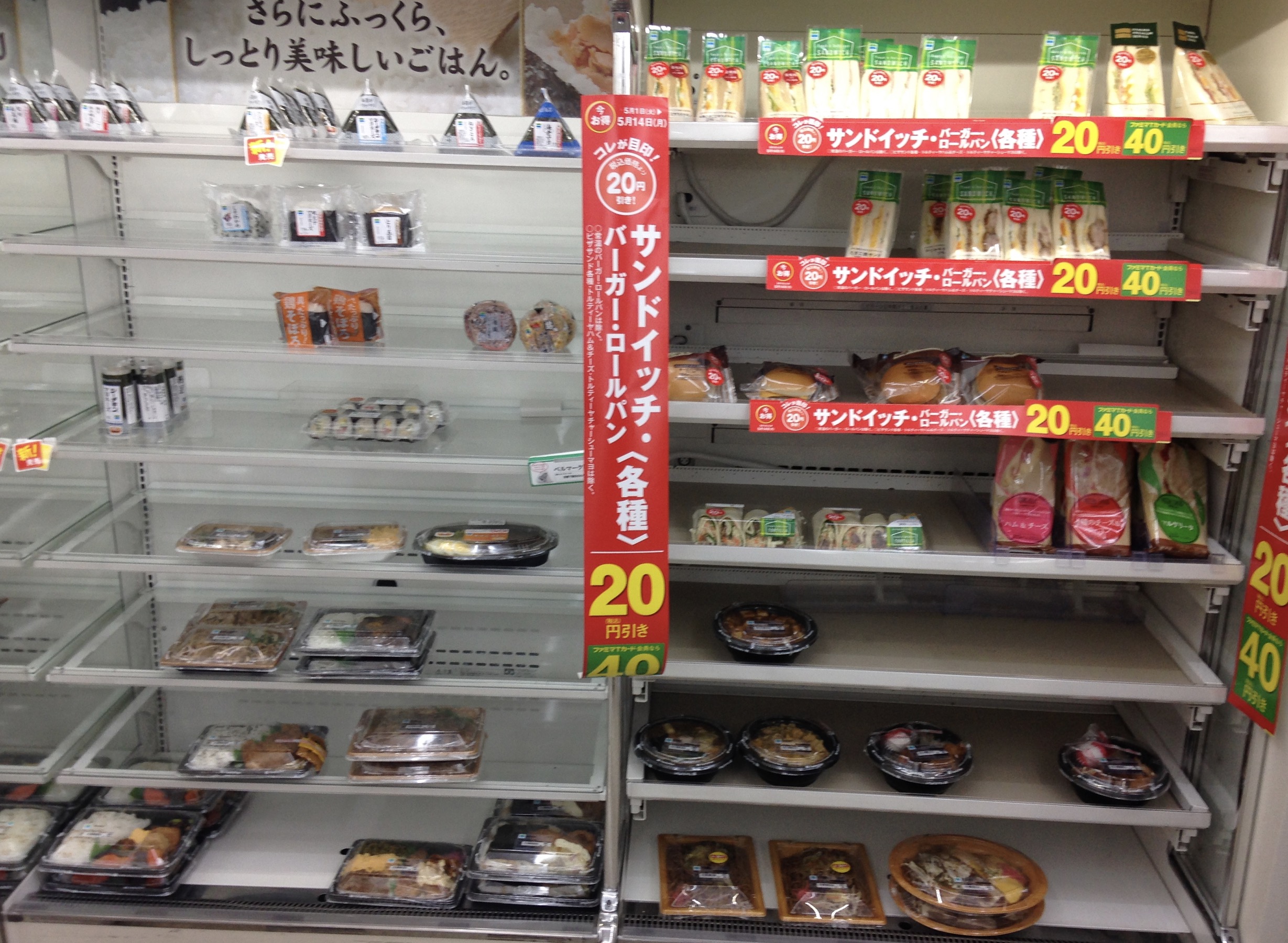 The last bridge of the day was the longest, tallest with the most breathtaking views. The Kurushima Kaikyo span is actually three contiguous suspension bridges, resulting in 2.5 miles of road suspended 200 feet in the air by six, six-hundred foot towers. Imagine the St. Johns Bridge, but six times longer and two-hundred-foot taller towers. The bicycle-only approaches spiral up into the air, first through, then above the trees to reach the road deck.

Oh the political will needed to pour that kind of money into a bicycle facility! 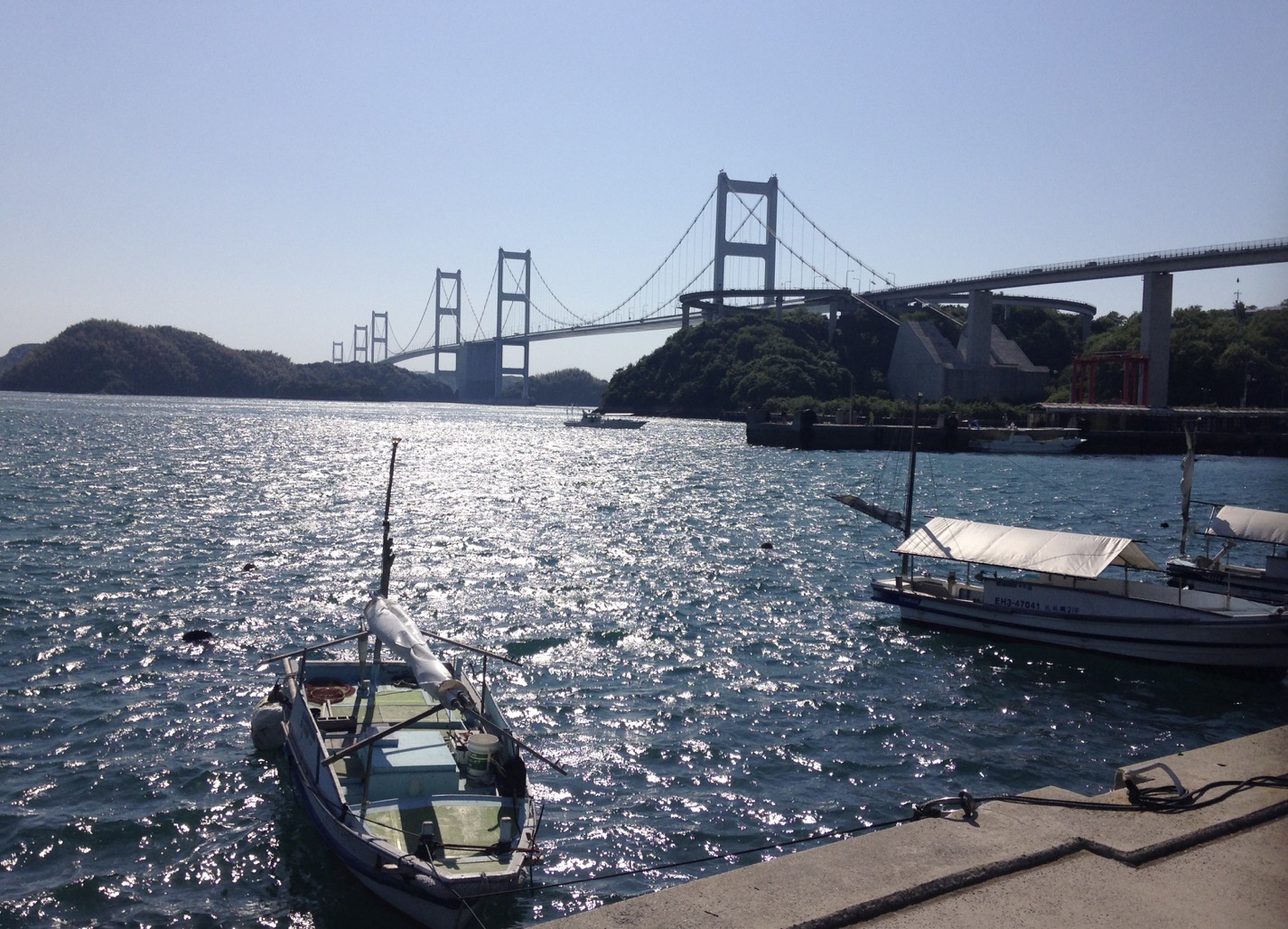 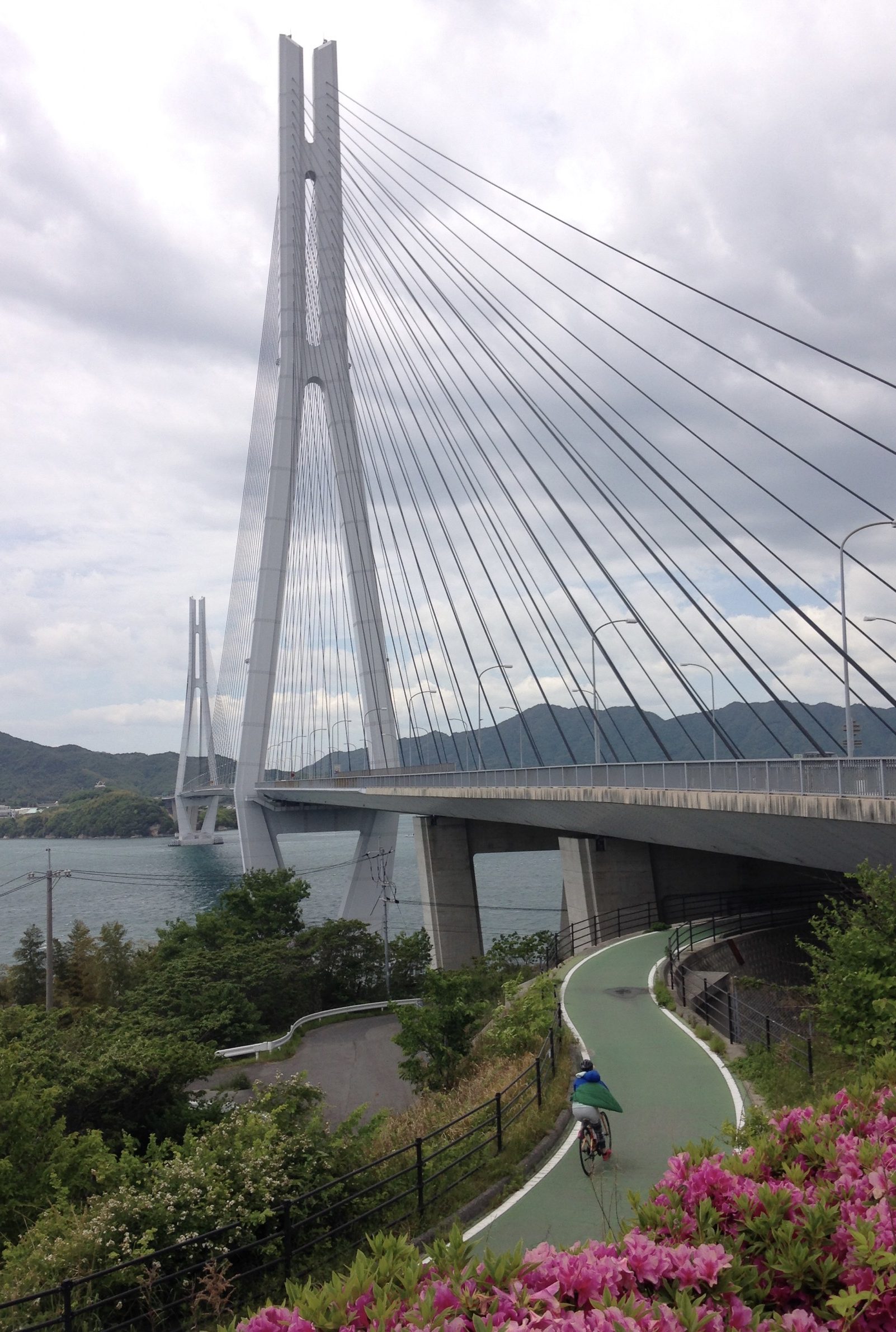 That night we spent at an Airbnb that featured bike parking in the bedroom. We also explored the local castle. 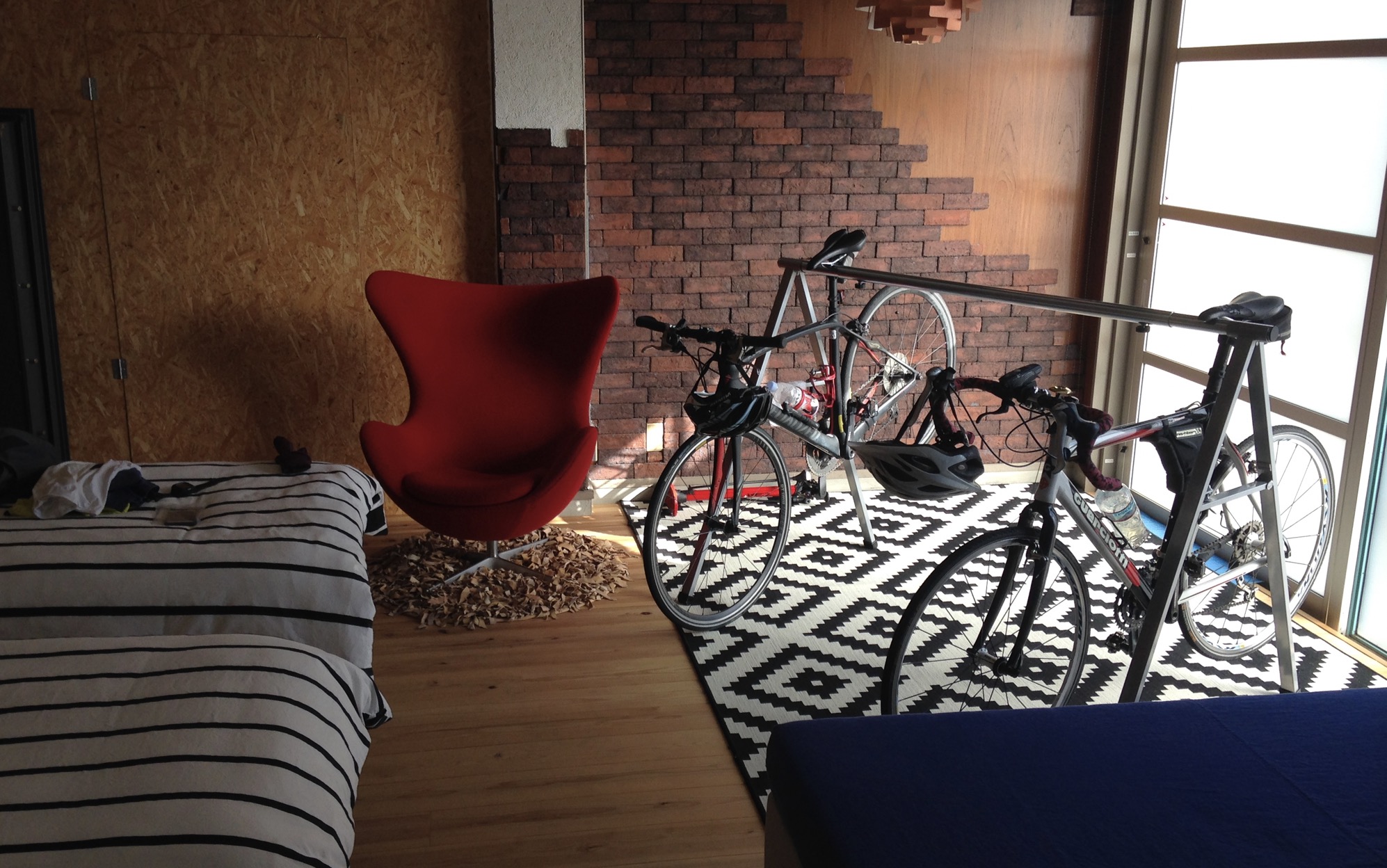 You know you’re on a well-worn bike path when…

We began the next day with a soaring, tailwind-powered flight back over the Kaikyo Bridge. Instead of repeating the exact ride back to Onomichi, we diverted to a few of the less-pedaled islands, enjoying the even quieter roads and blue-water vistas, slowly making our way to an intriguing guest house I’d found online. 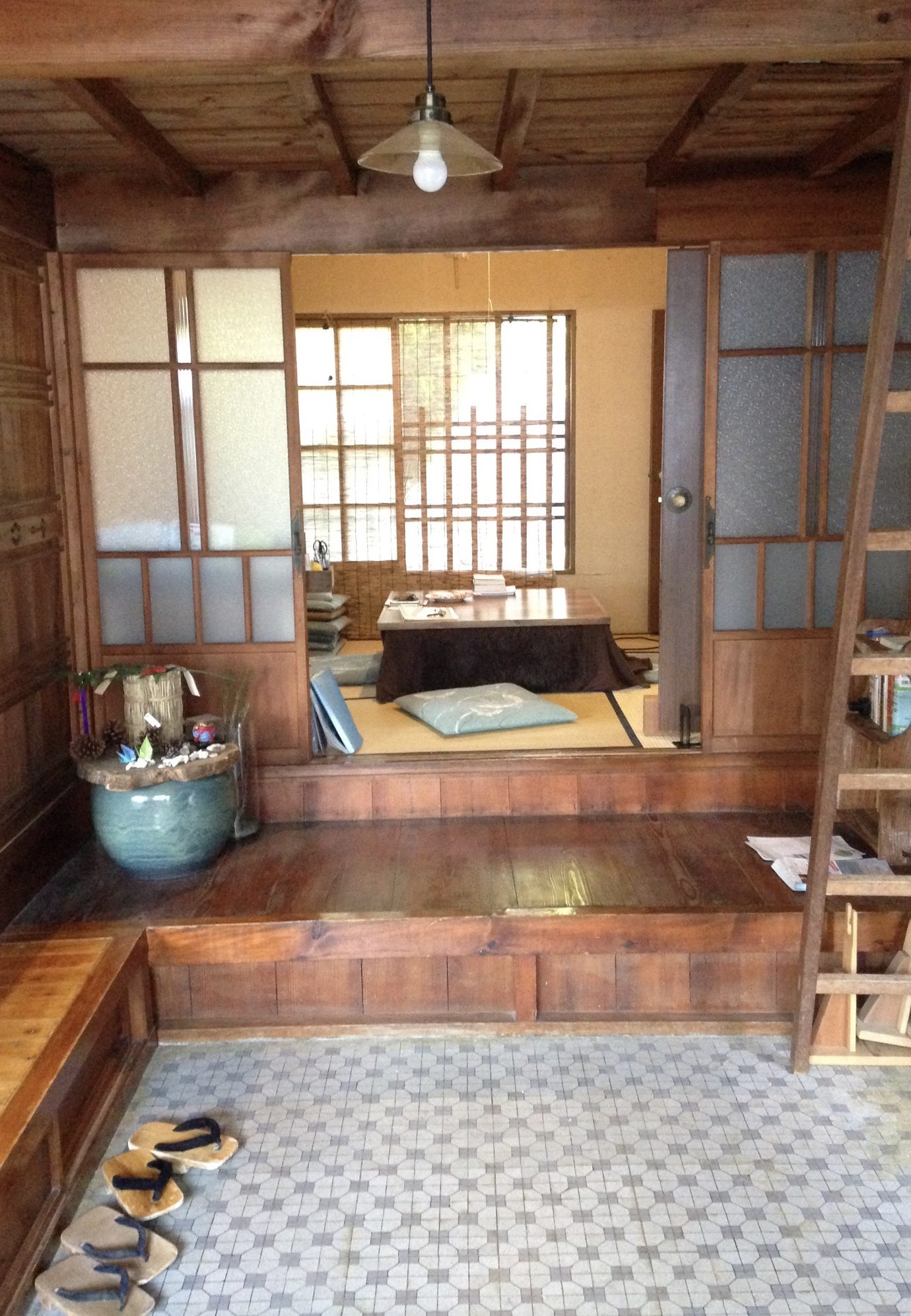 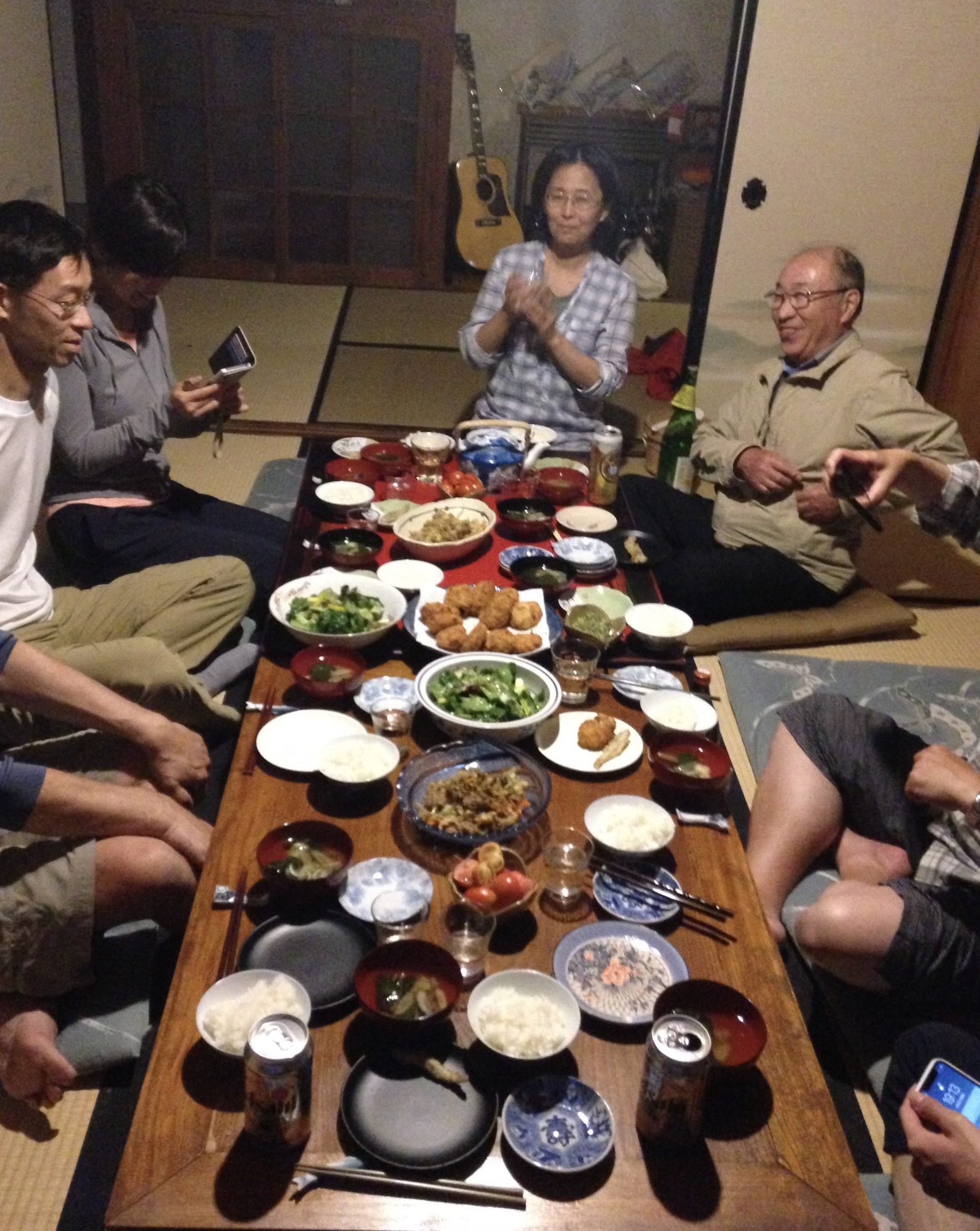 The Shiomi Guesthouse was cheap, off the beaten path, featured communal eating and sleeping on Japanese tatami rooms, as well as a wood-fired hot tub. But the hook was set when I clicked “history” and found a multi-part account of Robert Shiomi, born in the house in 1904, and immigrated to Portland when he was 13. He attended Failing Elementary, Benson Polytechnic, U of Oregon Medical School, and became a doctor! Interned to Minidoka in Idaho with his wife and six-month-old daughter during WWII, he returned to Portland with his family after the war where he lived his life as a respected doctor and unceasing advocate for better relations between Japan and the U.S. It was an unexpectedly sassive Japan-Portland connection… And the guy’s name was Robert! My high expectations were met by a kind, gracious hostess, interesting guests from various parts of Japan (including a gentleman who had already accomplished his retirement mission of visiting all 6,800 or so of Japan’s islands), great local cuisine, and a hot soak. A great finale to a fun trip.

The next morning we made our way back to Onomichi, bagged our bikes back up, and bulleted back home to reality. 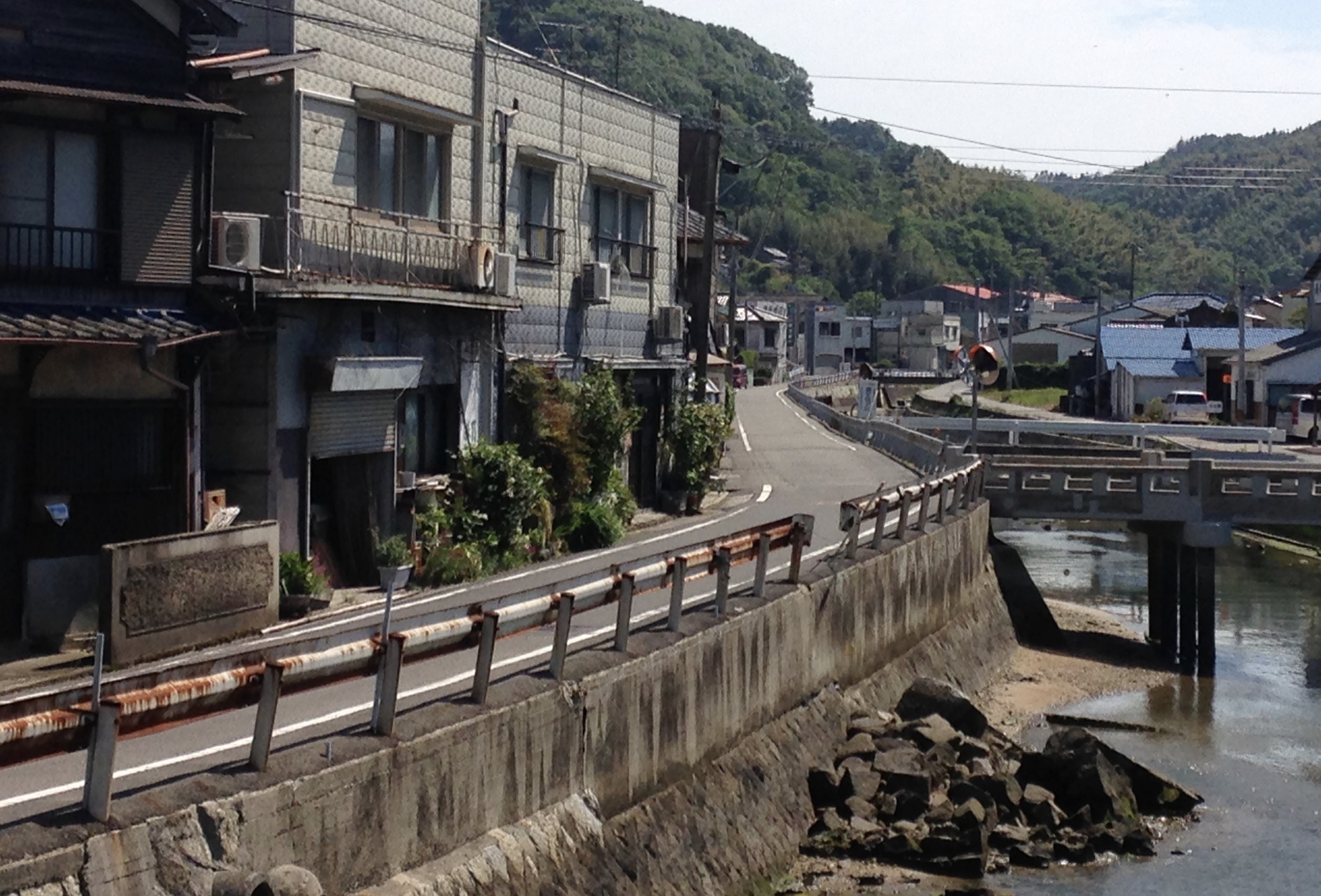 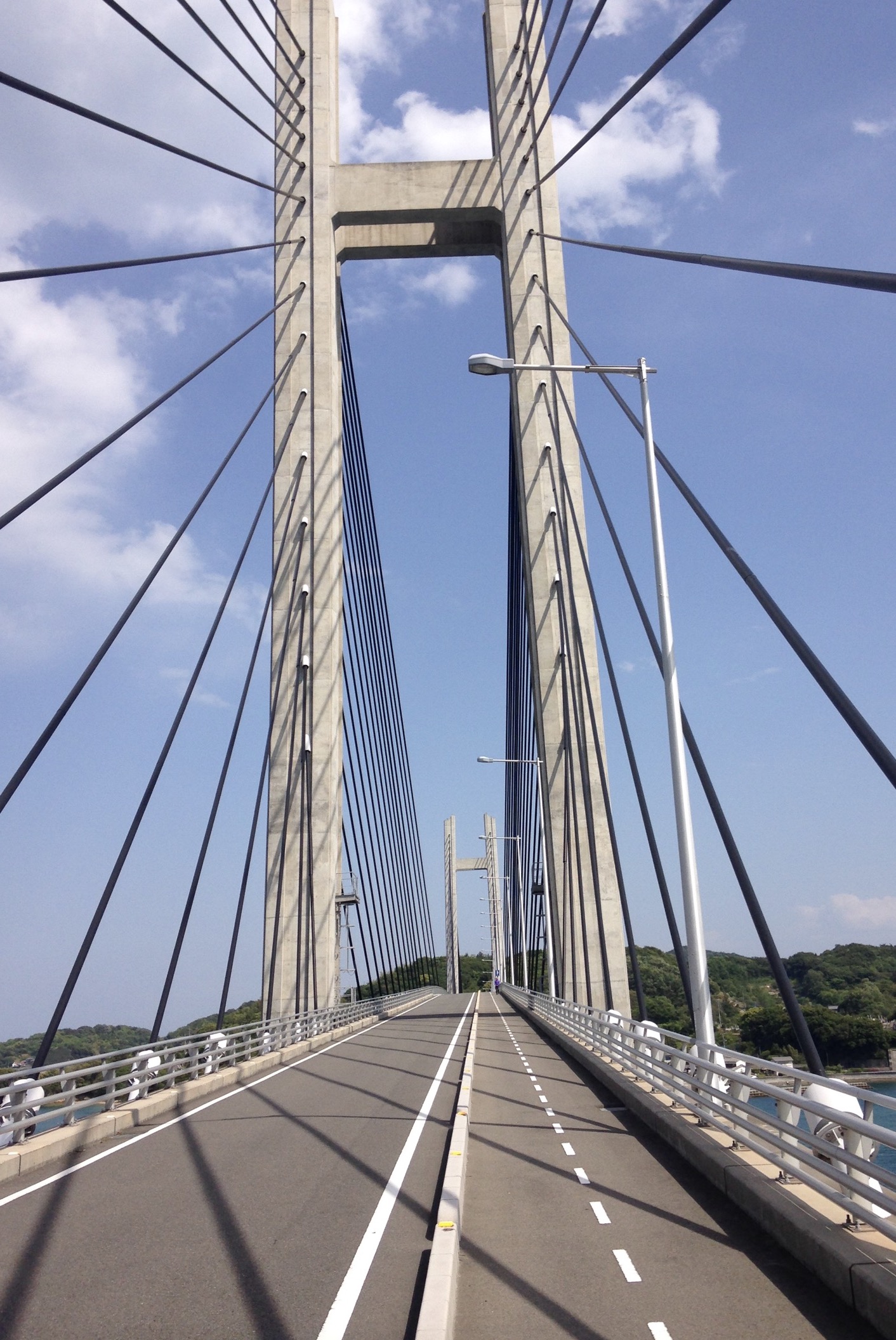 And of course I Strava’d my ride home on the bullet train, just so I could see the 249 mph average speed. 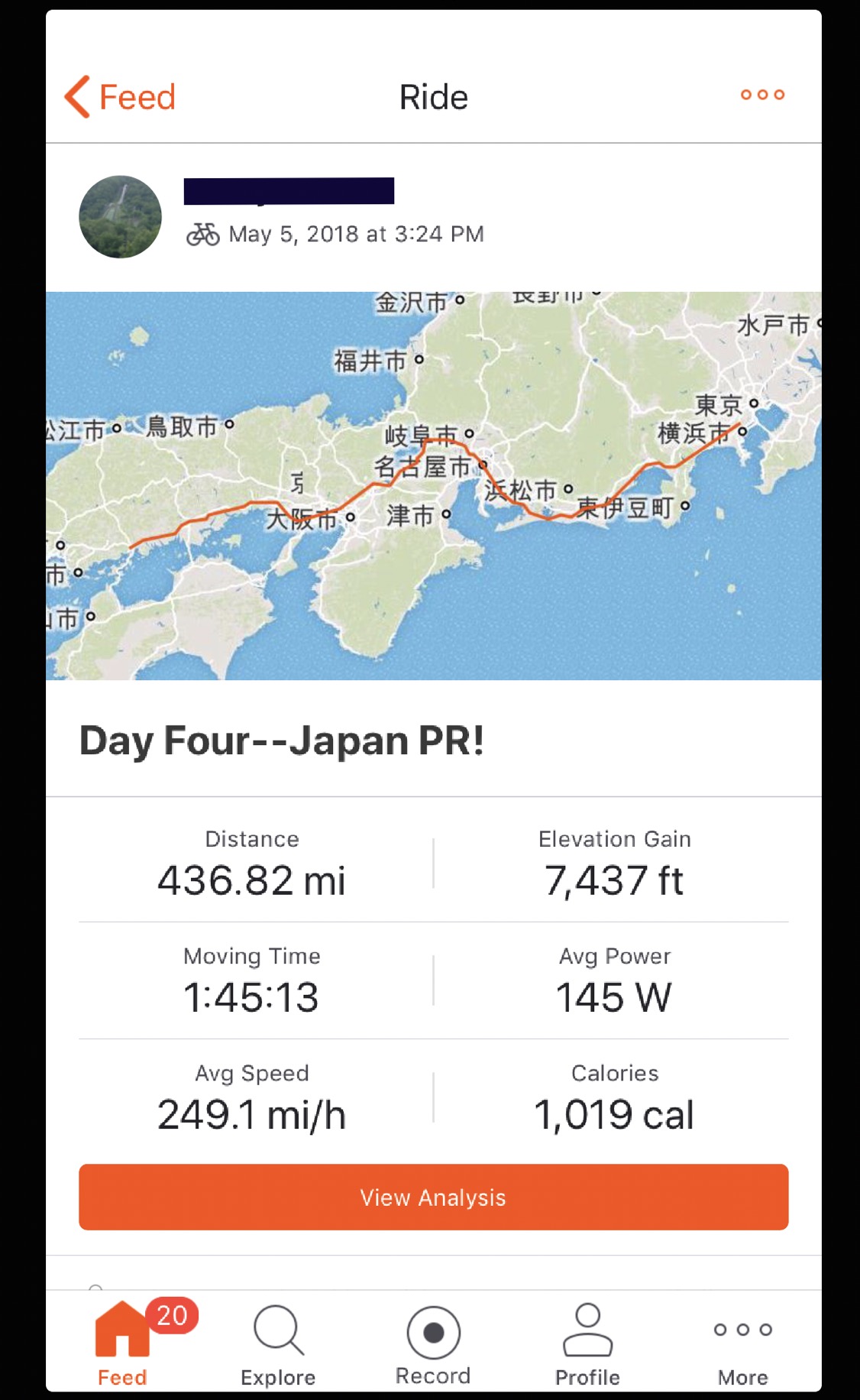 I highly recommend this route if you’re looking for a fun bike tour in Japan. For more info, check out this PDF for excellent maps and information in English.